Since tomorrow (August 4th 2015) makes one year to the day I brought my dog, Roo, home from the rescue farm, I thought it would be fun to update one of my most popular posts to-date. In 2012 (back when LBMT was barely four months old) I ran a post that broke down all the costs associated with my first dog, Murray, called “how much does a puppy cost.” Murray passed away unexpectedly in Summer 2014, but the post lives on.

Man, I loved that dog. He was my favorite thing on the whole planet and I was super sad for awhile after he was gone. Then Roo came into my life and made me smile again.

They're both very different dogs, purchased (adopted?) under very different circumstances. I know when I first thought about getting a dog people warned me how expensive owning a pet could be. For everyone wondering, “How much does a puppy cost, really?” -here's a breakdown of the costs associated with buying vs. rescuing a pup, as well as an idea of the startup costs involved when you take home a pet for the very first time. 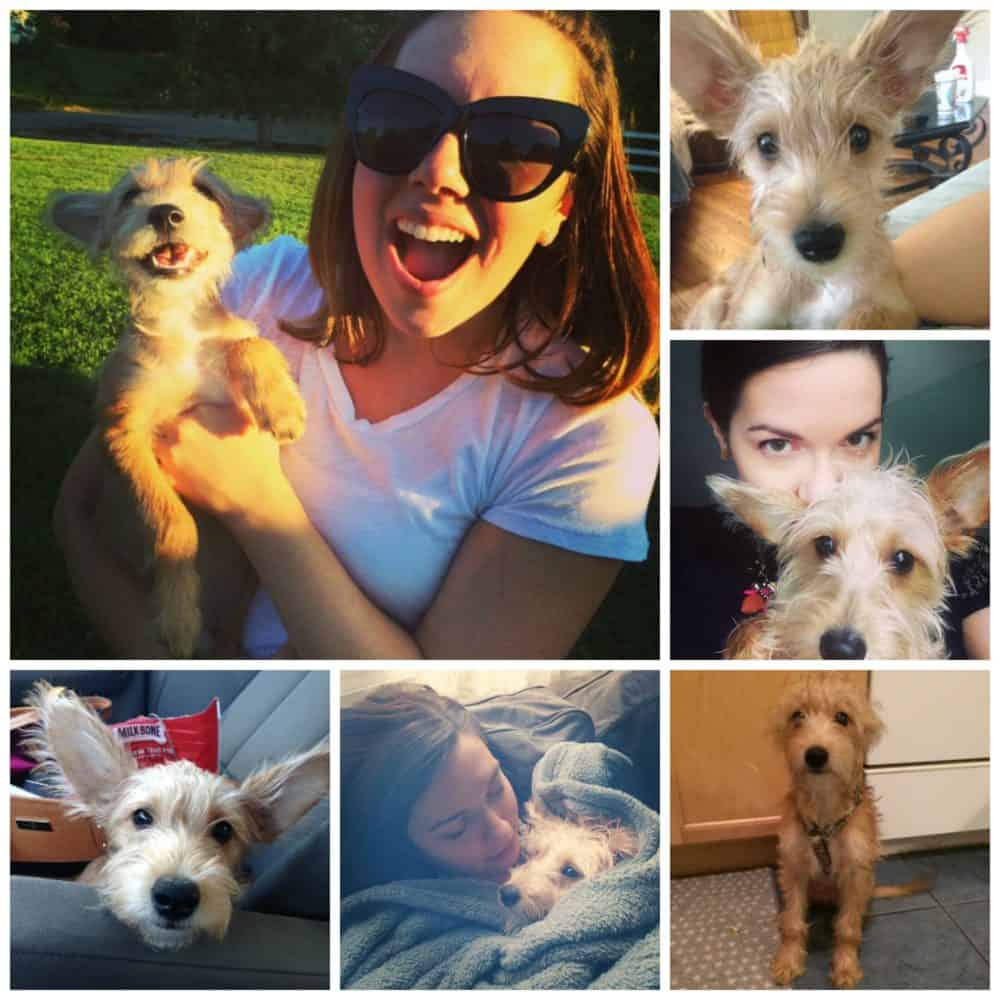 How Much Does a Puppy Cost?

I bought Murray in 2012 on a whim as a lonely gal in NYC. It was one of my biggest, most expensive “impulse purchases,” that turned out to be one of the most rewarding experiences of my life at that time.

Don't cringe: I purchased Murray for $800.00 from a pet store in New York. He was a special daschund-shih-tzu hybrid, on sale from a whopping $1200.00 because he was almost four months old and about to age out of the puppy store. He was nine pounds of adorable softness and I knew the moment I held him I had to have him. 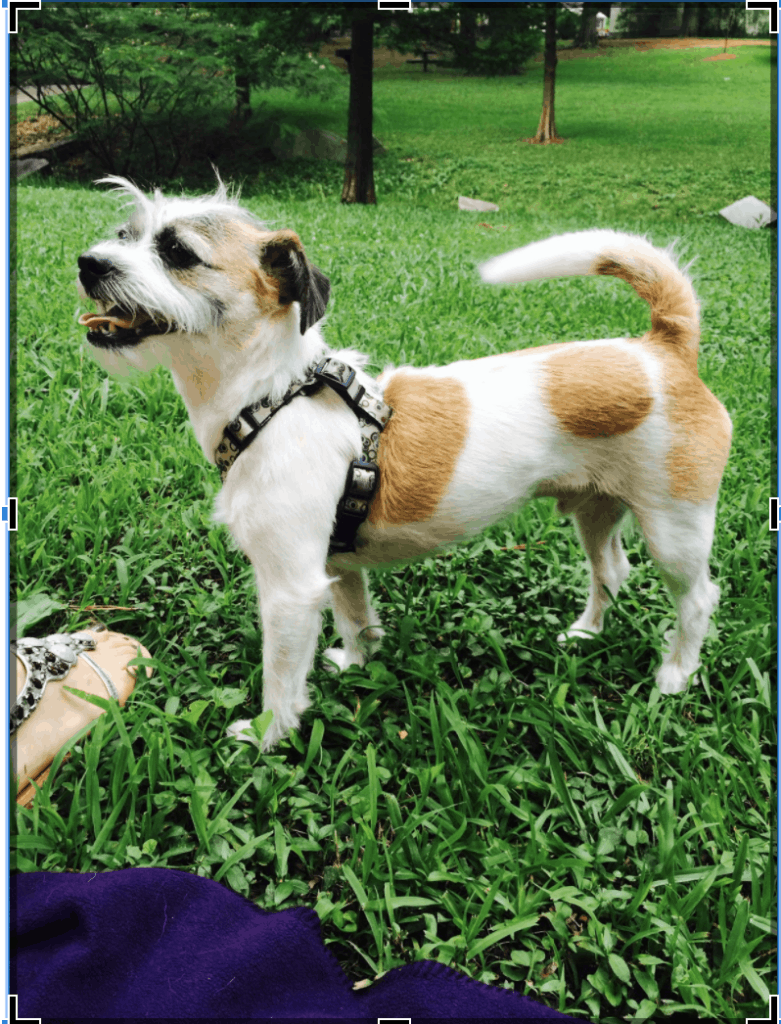 On top of the fancy pet store price tag, here's what I spent on supplies that first day, and in the first few weeks of owning a pet for the first time: 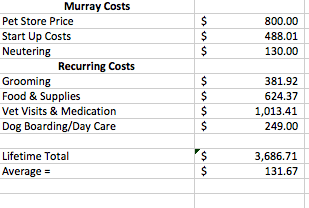 As you can see it cost close to $3700.00 for me to care for Murray during our 28 months together. Between food and supplies, vet bills, dog grooming, boarding when I was out of town, and medication the average came to around $131.00 per month.

I'll be honest- I wasn't ready for another dog when Roo came into my life. I lost Murray in June 2014 and by August I was meeting a new pup. My Dad thought it would help me heal (he was so right!) but being honest, it was difficult at first. I adopted Roo from the fantastic Animal Rescue League of Northwest Georgia, a no-kill shelter just north of Atlanta.

He was a sweet dog, but it was obvious he'd been abused in his previous life. He didn't do well with the transition to my house. It could have been worse, but we've been working through issues together. He's a very sweet dog.

I've only had Roo for 12 months (remember, tomorrow is his ‘Gotcha Day!') but the monthly average comes to about $103. 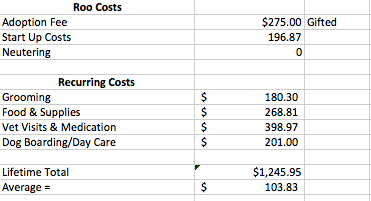 The (Financial) Difference Between the Two

My Dad paid Roo's adoption fee. Still, rescuing a dog has been way more economical in a lot of ways. Due to being a specialty breed, Murray had a lot of digestive issues. This led to more vet visits and eventually having to be on a hypoallergenic diet with dog food that cost close to $61.00 per bag. Yikes.

Also, Murray was purchased in New York City, where things are inherently more expensive, but also given that Murray was my first, I purchased a lot of cutesy things for him that I've realized most dogs just don't need. A few good chew toys and perhaps a cold weather sweater for the smaller dogs and you're set. After Murray ran away for a night, I had him microchipped and purchased insurance.

The bulk of Roo's costs are from daycare, which my vet advocated he needed to help him socialize with other dogs. I don't know what type of breed he is (I suspect a terrier-poodle mix), but he needs to be groomed more often. Otherwise, he's a very low maintenance dog.

Except for that time he ate two fun-size Hershey bars and I had to call the Pet Poison Control hotline. (It costs $35.99 to get an immediate answer by the way…)

A few tips on how you can save money on a pet of your own:

This list may seem exhaustive, but I wanted to give those considering pet ownership a true picture of the costs, or perhaps provide a benchmark for other pet owners when building out their monthly budgets.

Even though being a “fur-mom” costs a considerable amount of change each month (hey, $100 dollars as a line item in your budget is significant!), owning a pet is so, so very worth it. I've been lucky to have two amazing dogs, even if my time with one was much too brief.

And just as an FYI: there was never a time when I didn't think the money I spent was a waste or that I didn't willingly want to part with it. If anything, I just want to impress upon potential pet owners that taking care of a pet is an investment, commitment and responsibility– and should be treated as such. Yet, I can say with absolutely certainty that, unlike some other experiences in life, owning a pet always keeps giving back, and you get out of it a million times over what you put in. 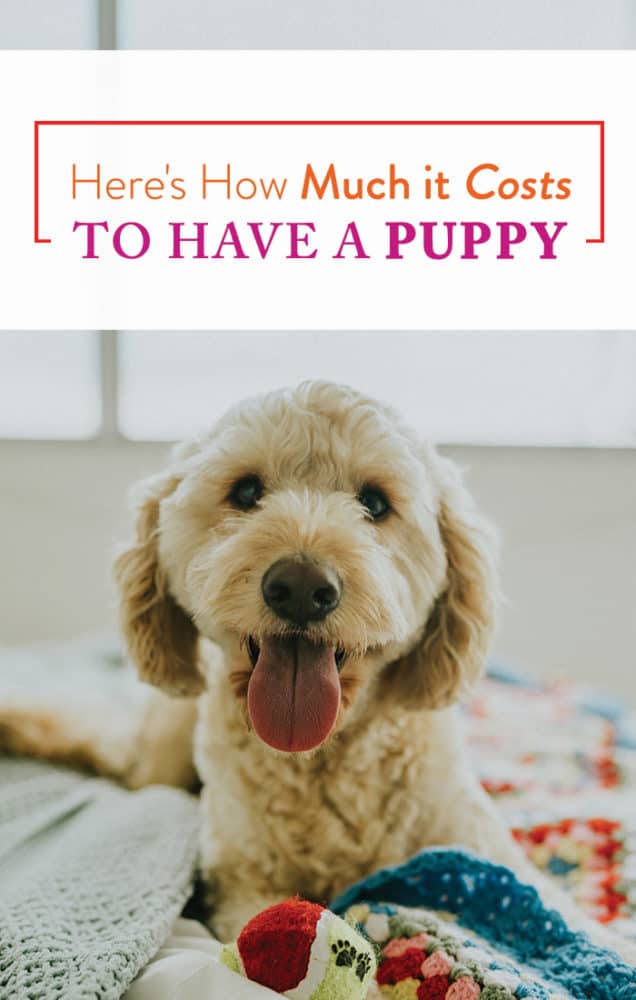