I've always prided on myself as being someone who gets by on less stuff. I'll credit my theater background: moving from month-to-month having to take theater gigs meant you could only possess what would fit in a suitcase or in your car. I managed to hold onto this minimalism for years until I bought my first home in the summer of 2013.

When you buy a house…people will start “gifting” you things to help “fill it up.” Sometimes it will be actual gifts and other times it will be things they can't bear to donate or throw away. (Just being honest!) At first it felt good. After all, receiving gifts is awesome, and as a personal finance blogger who never wants to spend money I don't have to, I love freebies as much as the next person.

But somewhere around the time I came home from NYC, and decided to sell my home, I began to feel suffocated by all my possessions. Literally, suffocated.

Feeling restless and in need of a change, I turned to the internet for help. So, I began to declutter my own life. Here's what I learned.

Getting Rid of All Your Stuff: You May Need a Buffer Period

I listed my home rather quickly, but that time included a lot of projects on the house and sprucing up rooms to make them more attractive to buyers. Part of the listing process is intentionally taking down your possessions so that people can “imagine” their own items in your house.

Doing this spawned a full out purge throughout my home. Some things were easy to trash and give away. Others I felt torn about and so I remembered a trick I often do with my seasonal clothes and something Cait recently did with her move.

I started boxing up my own possessions and within a month I knew if I wanted to continue to keep them in my home. Sometimes you just need a little buffer period to release and let go.

“I May Need that One Day” is a Lame Excuse

I love my Mom, but she's the Queen of, “But I may need that one day.” And 95% of the time, she's right. If she holds onto it long enough, chances are she'll need it again. It's how we've furnished so many houses and apartments over the years. (Thanks, Mom!)

I've always prided myself on being a purger. (I spent as a professional organizer in college as proof!) I even have a “one in, one out” rule for my closet.

But just because I'm good at purging doesn't mean I don't hold on to more than I should.

Last weekend I went on a huge Fall shopping spree and bought 15 new items, which meant that 15 items currently in my closet had to go.  As I was putting my new clothes away, my hands fell on a bunch of my old “office clothes” I used to wear on a weekly basis back when I had a full time corporate job. I haven't worn those items since, but I found myself repeating my mother's mantra in my head.

“I may need these clothes just in case I decide to go back to work some day.”

And then I realized I was holding onto these clothes because maybe…sometimes…I don't actually believe I'll ever really be able to make it as my own boss.

It may sound a little dramatic to have such a big self-realization in a tiny closet, but it's the God's honest truth. The reality of it washed over me in waves: I'll never actually be a success if I keep planning on failure.

And so went 15 of my snazziest office items to the “donate” pile.

During the purge I noticed a number of items reminded me of a time in my life I'd rather forget. And I have for the most part put that time behind me, but it's hard to look at an item or piece of furniture and not think about where it comes from or what it meant.

Why was I holding onto these items? Because I'm cheap and didn't want to replace. And I didn't think it bothered me; but truthfully, getting rid of them felt better than cleaning out any of the other items.

Yes, it'll cost money to replace these items, (I'm talking about a lot of furniture I bought/received when I first moved into this house) but at least when I do I'll be able to pick out brand new things that I love and choose them on my own terms.

I don't want to go into too many details, but my brother and I recently lost a number of items we put into storage. Was it really upsetting? Not really, because most of the items were in storage for a reason; chief among them being that they weren't being used.

We had to throw most of what was ruined away and no one shed a tear.  Once it all sat in trash bags, with the space around us so clean and tidy, we wondered why we even kept that stuff in the first place.

It Feels Good to Purge

I like to look at every item I'm giving away as one less thing I have to worry about.

Thanks to my great “summer” purge, I now have 226 less reasons to worry and am running 23% leaner. (Meaning I gave away 23% of my belongings) It felt freeing. Try it. I didn't make any money, but you can also sell your items for extra cash.

For now I feel comfortable with what I've done but would like to keep going: selling off the bulk of my furniture after I get rid of my house and no longer need those items for staging, continuing to phase out my “Corporate Lauren” clothing, and digitizing my files so I no longer need to keep stacks of paper copies.

I think it is important to yes, spend mindfully and consume less, but also become comfortable with using items for when you need them and they serve you, and then letting them go when those reasons no longer apply. 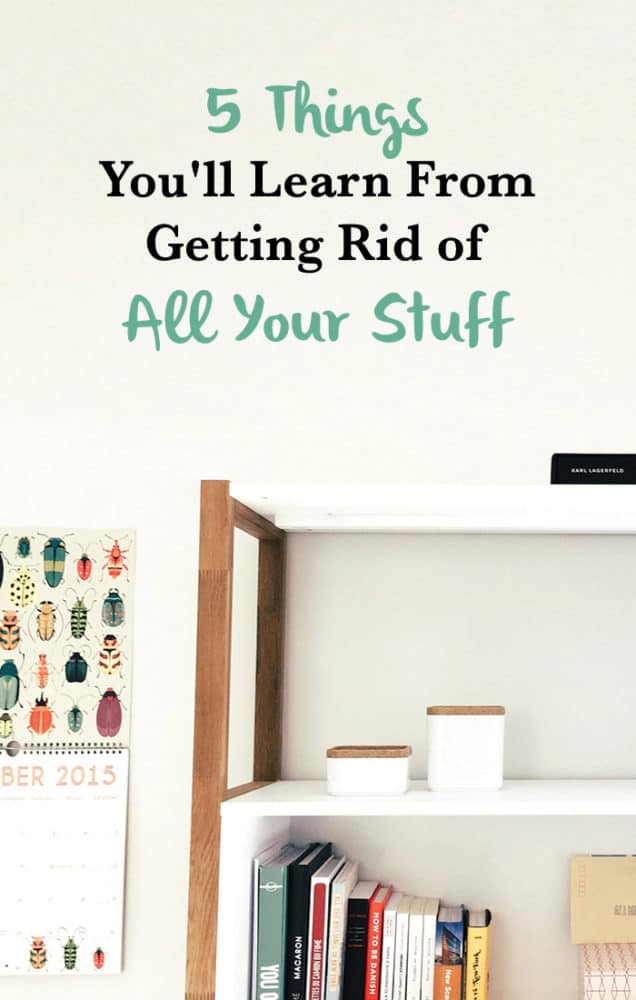