This will be a tough post to write. Not because the news contained within is shocking or surprising, but because it is the first time I've been completely, totally, 100% honest my own money choices. Here is my deepest, darkest, dirtiest secret about my finances….

For those just tuning in a little back story: I bought my first home in July 2013. I funded the renovation with a 203k loan, but went over and had to raid my savings account to finish the project. Having no savings cushion then led me to lean on my credit cards for “emergencies” in the Fall of 2013 and by NYE 2014, I was 8,432.16 in debt.

I was doing well on repayments, until the summer. My beloved dog died, my identity got stolen, and I had an intense falling out with a roommate all within the span of three weeks. On top of everything else I was still dealing with from Fall  2013 (broken engagement, runaway renovation), it felt like a ton of bricks.

And if you've been reading here for a while, you know that I have a problem with shopping my feelings. Which is exactly what I did.

One year later, by Fall 2014 I was feeling better and I managed to make some progress on my debt repayment.

Between my savings, my home appreciation, and my winning retirement accounts, my net worth did increase over the year.

All-in-all there were some financial victories in 2014.

But ultimately, 2014 was a year of financial failure.

Honestly, I was too enthralled with the emotional things that were going on around me to pay too much attention to where my money was going. I am disappointed that for years I've prided myself on being a go-getter and a goal reacher, and my biggest financial goal in 2014 was to pay down all of my debt. I did not get there. Not even close.

Because I use my YTD spending tracker, I was, however, able to see how much I did put toward my cards. I made $11,011.54 in credit card payments this year, which would have been enough to cover all of the debt and then some.

Put simply: I was paying off debt, but only at the rate at which I was spending.

Please let this be a lesson to those of you working your way out of debt right now: STOP USING YOUR CARDS. You will never get anywhere if you don't.

Currently, mine are in my freezer. As a New Year present to myself, I put $1,000 from my savings to my debt on January 2nd.

And as of January 1, 2015, I'm on the Spending Diet, as created by the lovely Anna Newell-Jones. The gist of it is that you only spend on necessities, and give yourself $100 of “play money” each month. This is different than the spending fast where you don't spend anything except what it costs for rent/utilities/gas and groceries. That seemed a little too strict for me to begin with, but I liked the idea of the diet, so I'm trying it out.

It's ambitious for sure, and I don't know what life is going to throw my way, but that is why I am sharing it with you all….to put it all out there and keep me accountable once and for all. I hope this inspires some others out there battling with recurring credit card debt to join my movement, throw the cards in the freezer, and get free once and for all. This is Part 1 of what I'm calling the LBMT- Get Debt Free Plan.

Every business owner needs a website, and this is so much easier when you have your own hosting and domain name. Get an inexpensive hosting package so you can have more creative control over how your website functions and what it looks like, and as a place to post all your great content: from blogs to pricing updates to testimonials. Click here to review Hostgator hosting packages and pricing. Using my special link, readers can get 50% off 1, 2 and 3-year plans!

I have multiple income sources of income:

Consider this: Everything in your home used to be money. Why not take the time you save not shopping to earn extra from your old items as well. Click here to order a thredUP closet cleanout , or click here to learn more about consigning high-dollar designer items with TheRealReal.

Holy mambo Batman. This number is so, so incredible to me because it encapsulates an entire thirty days of focus and hard work. It's even more astounding that just a year ago that was more money than I made in a month at my full-time job. Just goes to show you that ANYONE can grow their income.

Here's how my numbers break down. Please keep in mind these numbers are BEFORE taxes and other business-related expenses.

Here's a pie chart of my total side hustle income pie. 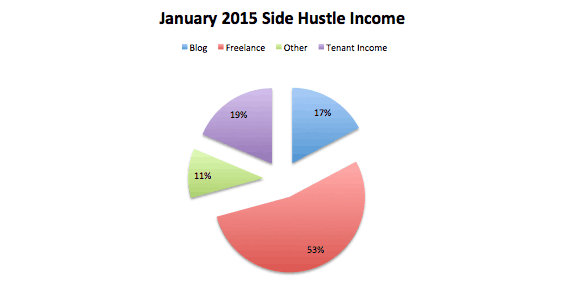 I swear that I'm not pretending to be amazed, I just actually can't believe I did it. I didn't even really think about the money I was earning, just that I knew I had a goal in mind.  So, I kept my head down and kept moving. It wasn't until I sat down to tally up the numbers this AM and pay off the balance on my Chase card that I saw how far I'd come in just 30 short days.

I'm excited about what February has to bring. I've already got $1700 in projected revenue for the month and it's not even February 1st yet (as I write this for publication on Monday.) It's very exciting to see the focus and hard work you put into something being returned. There isn't anything better!

P.P.S. Did I complete the challenge? Find out here.

The best side hustle I can think of is blogging, which isn't possible until you buy a domain name and hosting. I recommend Hostgator for the cheapest industry pricing and easy WordPress installation. Investigate Hostgator options here. Using my link you can get hosting for as low as $2.75/month.
Pin
Share
Tweet
2 Shares