How many of you watch TV? Not cable…I’m talking Netflix, Hulu, Amazon, HBOGO. TV is part of our culture, and almost everyone I know watches a healthy dose of it.

I’ve always been a big TV fan. I have the shows I keep up with, and then I binge watch series with people. Binge watching TV has become an activity you can do with other people…it’s become “our show” or “our Wednesday night thing.” TV unites us.

But the reality is that ever since I left my full-time job I have been consuming an inordinate amount of television.

Now that I work for myself I am earning more while working less. I fill my time with working out, professional development and socializing….but there’s also a lot more unfilled, unscheduled time. And so it’s been Binge watching Friends in April-May and Scrubs from July- August. According to this app I’ve spent nearly A WEEK of my year in total time watching these shows, and you never notice. It just runs through your fingers.

I also want to point out, I can’t find time to take a whole week for vacation, but I can find time to binge watch shows.

Let me start from the beginning.

I lived in the total 90’s household: Pop Tarts, Easy Bake Ovens, The Little Mermaid, and my American Girl Dolls. Something was always on TV: Nickelodeon shows, Saved by the Bell, Full House. My family would watch television together on Friday nights as a treat.

I wasn’t allowed to watch much TV during the week. In fact, probably only half an hour a day. During the summers my Mom would push my brother and I outside into the yard and we couldn’t come in until dinner time. I loved being outside.

Living alone in NYC the television was always on. When I got my own apartment there and began living on my own (alone) for the first time, I think it helped me feel both safe and like I was back in my sorority house in college. I’ve seen every episode of Law and Order: SVU.

I could go on and on about how TV has been a healthy part of my life. Who doesn’t love TV?

I think where it crossed over into unhealthy territory is when I became my own boss. I began consuming television passively as I worked. This led into a spiral of me skipping my workouts, forgoing plans, and spending a lot of time on my couch just so I could watch more TV.

Getting Started With The Challenge

Yeah, it’s Frugal. But it’s also unhealthy. In preparing for this article I found some scary stats.

I am in the middle of the first year of launching my own business and incredibly busy building my own brand. There is always something I could be doing, and while I love the TV,  even I acknowledge that I’ve got sh*t to do.

Thankfully I’ve been busy the last few weeks with conferences, so I’ve been watching less and less. I’ve also started working out of a co-working space, so I’m physically home less (and passively consuming less TV.) I think the biggest areas where I will miss TV the most is when I’ve incorporated it into my “routine”: at night when I am unwinding and in the morning– I like to watch about 30 minutes of television with my cup of coffee.

I don’t want to give up TV forever. But I do want to change my life. 30 Day challenges are perfect for this kind of pause and reset. So many of the people I admire spend more time reading books, listening to podcasts and learning new things to grow their businesses and change their lives, and I want to be like that. When looking for more hours on the day and room on your plate, discretionary activities have to go. TV is the easiest thing to cut.

And besides, I don’t want to be the grumpy freelance writer on her couch in PJ pants with ramen down the front.

So to curb my initial panic here are 10 things I plan to do when I want to watch TV but can’t.

Here’s What Actually Happened When I Quit Watching TV

I said I was Going to Quit Watching TV….But Was I Able to Do It?

I’m not going to lie to you.

When held up against some of the other challenges I’ve done, this one will easily live on the “abysmal failures” shelf, and there are many reasons for this, the main one being that I spent a large majority of September and October sick in bed. It’s like me declaring to the world that I wasn’t going to watch the TV for 30 days was the universe’s cue to send me various ailments to truly test my will.

…..But There Was Another “Win”

What I was able to do, rather successfully, was significantly decrease my television time (and subsequently all screen times in general). I estimate before the challenge I was spending about 3-4 hours a day on average in front of the tube (usually working.) Now, I probably log about an hour a day, and some days I go the whole 24 hours. Me going an entire day without television was unheard of until I attempted this challenge.

While not a “win” necessarily, I consider the outcome real progress on an aspect of my life I was looking to change. And as with every 30-day challenge, I did manage to learn a thing or two. Here’s what happened:

Not Watching Television Made Me More Productive

I feared my love affair with TV was getting in between me and my business, and I admit that the need to be more productive during the day was the #1 reason I took on the challenge in the first place.

And this is where the “all or nothing” approach to the 30-day challenge really comes into play.

Once you take something away and truly deprive yourself, you have to find other ways to fill your time. In the prep piece I listed off 13 things I was going to do instead of watching television: cooking more, reading more, playing with my dog, staying on top of my laundry. With the exception of taking voice lessons, I completed everything on that list.

And with my business, spending less time in front of the TV allowed me to focus on getting work done and courting new clients. I’m on track to have my first 5 figure month this November and I couldn’t be more excited, due in large part to ground work I laid in October when I spent my time building my business instead of watching Scream Queens.

And that’s when I realized that it’s a vicious cycle– you’re never going to feel productive and empowered sitting in front of the television. Basically, you have to show up.

Not Watching Television Helped My Wallet and My Waistline

In an effort to entertain myself sans-TV I started listening to audiobooks and podcasts on my cell phone. I did this in my spare time, but I also started incorporating them on my daily walks with my dog, Roo. Instead of walking for 20 minutes, I’d get so caught up in listening that I’d walk for 45 minutes to an hour.

Having an extra hour or two in the evenings (time normally spent in front of the television) also meant I cooked more. I’m still on a cooking kick from the last challenge, but I think all of these things put together helped me lose four pounds in the month of October.

And, oddly enough, my personal spending in October was way down compared to every other month of 2015 so far. It could’ve been that I was so busy with the extra workload and the travel that I didn’t have time to shop or go out much, but my spending was significantly less.

I can’t personally correlate watching television with spending less money since it’s just one month, but it’s been proven that the rich and elite watch less than one hour of television per day.  If that’s not motivation to put down the remote, I don’t know what is!

When I Lived my Life without Television…. It Forced Me to Confront Issues

Television is designed to be a big, glittery distraction. In the past, I mainly used the tube to decompress after a long day, but perhaps more subconsciously the television helped me forget (for an hour or two) about whatever was stressing me out.

In turning off the television I had to deal with issues head on and in real time. No distractions. No “I’ll get to it after I watch xyz.”

The biggest thing this challenge taught me is that I’d  been using the television to soothe myself. Instead, I had to find other ways to relax like taking a bath, journaling, and practicing meditation.

Sometimes I was annoyed I couldn’t watch TV. But I’ll begrudgingly admit it: not watching television was helpful.

I’ve been indulging in guilt-free TV with a few new constructs. After my last post, a reader named Colin commented that he limits his TV time to just one day of the week, and I loved this idea! I’m currently limiting my TV time to just Saturday and Sundays and reserving the weekdays for work and other tasks.

This puts a big time cramp in my style since I love nothing more than getting up in the mornings, making coffee, and watching Hulu until I feel like my brain can string together more than one sentence, but I’m going to try journaling and an earlier AM yoga class instead.

BUT as a solopreneur, my days can often feel like they bleed into one another and since I no longer have the typical Monday blues or Friday excitement, reserving television makes the weekends feel a bit more special again.

So for everyone who wrote in last time saying they didn’t know if they could do the television challenge I say, give it a try. At the very least it’s an eye-opening exploration into how you spend your time and what fills your days. I like filling the corners of my life with my own stories and experiences rather than the ones of my favorite TV show characters, and when you’re binging on Netflix there is less time for new and exciting.
Want more? Click here to follow me on Pinterest and never miss a post! 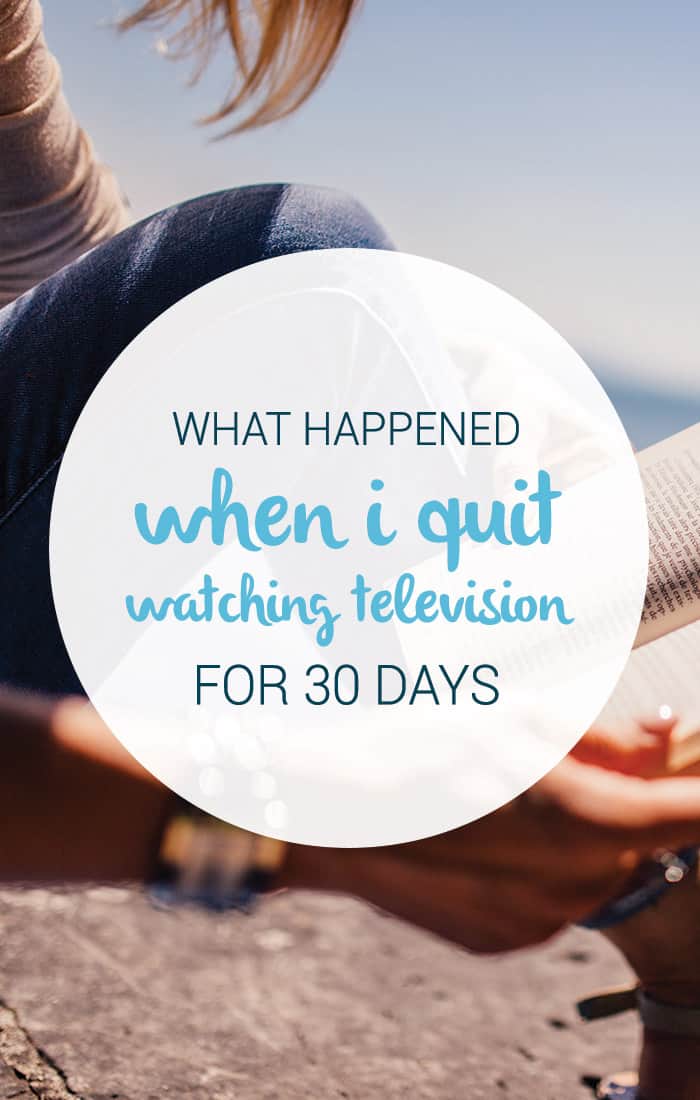